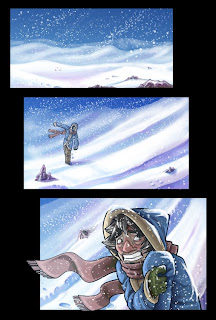 Test #1 was a success! And because it was a success, I will actually post a sneak peek (if it had been a disaster, well... I would have just kicked it under the beg, folded my arms behind my back, and wandered off whistling).

This is a page from the Prologue of Ghost of Man. The character featured isn't anyone super important (though certainly significant), so don't attempt to locate him hiding somewhere in the line-up below. I did a few things aside from painting the backgrounds that *should* cut comic creation time considerably, including the shrinkage of the page size from 8.5x11 to a more standard comic side of (roughly) 7x10. I also got rid of those coloured lines. Now, I'm a big fan of the coloured lines and I really think they look better in a finished piece of art, BUT, I can't be super picky. Pages can't take forever, so I'll keep the nice lines for other pieces.

So! There you have it. I enjoyed that experiment and am looking forward to painting again.


Now for something I found this past week...

I thought this was really cool, and suddenly I find myself searching for teeny tiny people on the street as I'm walking, just in case I miss something cool or accidentally smush them to death. The artist known as Slinkachu has set up ridiculously tiny people in ridiculously tiny scenes on the streets of London in a really unique and rather bizarre art experiment. Bizarre simply because... how many people have actually spotted them?

Check out the photos! And then be wary of teeny tiny people forever more.
Posted by Sarah Anne Davis at 5:54 PM 1 comment: