My leica for Storyboarding and Sound class! Much thanks to Nancy Beiman for providing advice and critique from start to finish, to Annie for having to listen to this song forty-thousand times over and not eating my face, and to Chelsea for giggling at the parts I intended to be amusing. It was a fun little story to work on and I'm happy with the results.
Posted by Sarah Anne Davis at 7:05 PM 3 comments:

Can't believe it's that time already! Saw the 2010 Year-in-Review art meme on DeviantArt and had to fill it out. Doesn't feel as though a year has actually gone by already... but I guess there has been a rather distinct change in my art, hopefully for the better, over the past 12 months, when you place 2010 and 2009 side-by-side: 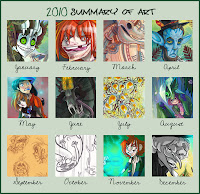 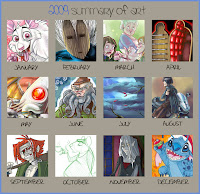 Just posted a placeholder on The Awakened website. I plan to install ComicPress over the Christmas break, and then with luck some actual comic-making will be initiated.


And speaking of Christmas, I have a piece of lovely, wholesome holiday art to share. This was done for our English class, of all things. The theme was "Capitalist Scrooge". Simple explanation is that by the end of the story, Scrooge is still a capitalist, regardless of how generous he may have become with his money. Lots of meaning forced into every corner, which may or may not have been lost as I went on, just trying to make the thing look nice. 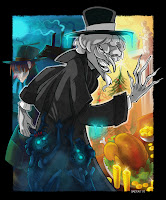 No, I don't believe the argument this illustration is trying to make, but it made for something interesting to draw.


Finally, I wanted to share this... I'm sure every animation student under the sun has already seen it (I believe no less than 20 people posted it on my Facebook over the past couple days), but it really does deserve all the attention it's getting. Absolutely beautiful little film.

And the race to catch up on missed posts continues.

Today, more "Floating Head Syndrome" sketches. This time of Asher and Montague. Both of them benefited from a nose job, and I would apparently make a rather shoddy plastic surgeon, because crooked hooks and gigantism abound.

I've heard a bit of feedback on both of these re-designs already, and I had to laugh at how many people thought I'd made Asher "ugly". It made me smile for the fact that Asher was *always* supposed to be a very ugly, ugly man. He's one of those so-ugly-he's-charming characters. So if anything, this update has taught me that I really have learned something about character variation. If the old Asher appeared "hot" to people, then I fell far short of my goal. So, as Asher is properly ugly now, I am quite pleased!

Received a mostly positive response for Monty, except maybe a little dislike for his new nose, but we can't all have beautiful, identical noses, people!


Aaaaaand in the world of school, I have... more Awakened stuff!

The assignment was a walk and run. We had to use contrasting characters, so I chose to animate Plague and Famine. I was juggling a fair number of projects alongside this one, so it's not as elaborate as I would have liked (particularly the interaction), but it did give me a chance to update their character designs a little.


(Apologies for the awful white BLOB in the corner. For whatever reason, whenever I put this clip online, the compression murders everything. If you squint, you might have some vague idea of what's happening.)
Definitely enjoying the chance to bring my established characters to life (though I can't do it for each assignment... as, well, the idea is to create new characters).
Posted by Sarah Anne Davis at 2:14 AM 4 comments:

First off, yup, I re-did my blog layout again. And I think this one will stick around for a while, as Blogger finally added a proper Template Designer, allowing me to let go of the free-downloadable-template life preserver. Now it's miiiine, all miiiine! Right. And to the post...


Those who know me well know that I really love to forum roleplay. It's an excellent creative writing exercise, and it's helped me to get to know my characters more thoroughly and more quickly than by simply filling out character sheets and charts and poking at my brain with a sharpened stick (it tickles! But on the whole, unhelpful). I only RP with friends, and only in well-structured environments with stable storylines and a lot of behind-the-scenes plotting and discussion, but even then we've got five or six active stories in progress.


And why does all of this matter?

It doesn't! Well, see ya, that was a fun post--Oh no wait, I drew a bunch of RP artwork. 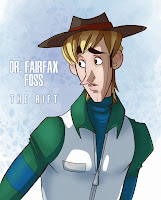 Our most recent story is "The Rift", started by Annie, Chelsea, Corrin, and myself. It's a sci-fi, space-exploration theme, and I'm using Chase as a physicist (for the utter durhurhurhur factor), Fray as a mechanic (an excuse for him to hit metal stuff with other metal stuff), and my Dr. Foss as exactly what he always is.

In preparation, I drew some character profiles. Had particular fun with Fray's if that isn't completely obvious.


I definitely highly suggest any writer struggling with character development to consider roleplaying with some writing friends. Knowing exactly how your characters would react in any number of situations, really becoming them, is incredibly helpful and necessary for constructing believable, unique characters.
Posted by Sarah Anne Davis at 3:33 PM 1 comment: 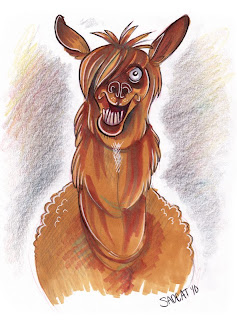 Once again attempting to catch up on posts here...

IT'S BEEN CRAZY! I'm still loving my second year of animation, but the past few weeks have definitely been exhausting. Many major projects, the holidays wanting attention, various nuisance illnesses... Barely a moment to breathe, let alone any time to myself.

But I'm managing to keep on top of things, so that's about the best I can hope for, and there are only two weeks left until Christmas break, which I think will be very much well-deserved by all.

BUT ENOUGH OF THAT! THIS POST IS ABOUT ROYAL WINTER ANIMALS! Except that none of them were wearing crowns at all, I noted a distinct lack of snowball fights and ice rinks, and I'm pretty sure the goats were just dogs with toilet paper rolls glued to their heads. HIGHLY SUSPICIOUS THE WAY THOSE GOATS CHASED FRISBEES.

In short, our class went to Exhibition Place for the Royal Winter Fair, and drew many a farm animal. 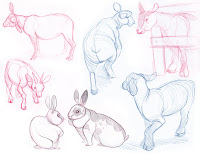 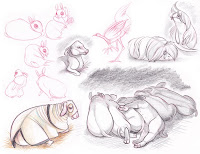 Moral of the story: Don't attend a livestock show if you hope to continue smelling of anything but poop.
Posted by Sarah Anne Davis at 12:52 PM 2 comments: