Yeah okay, so it's once again blatantly obvious that not only were the last two months of my summer fairly eventful, but I am back in school! AND I'M FREAKING LOVING IT. So far Sheridan's animation program is everything I hoped it would be. I'm learning lots already, the teachers are incredible, I've made friends, and am generally ecstatic with my classes and the amount of art I now end up producing on any given day.

That said, I can't post ALL of it. Not only would I be spending hours of my days scanning pages of copy paper, but a lot of the stuff that shows up in my sketchbook is probably only interesting/funny to those who were present when it was initially drawn. Not to say I won't share some seriously random drawings, however. 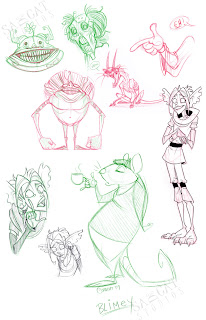 And hey! Speaking of random drawings! What a convenient opening...

Okay, so... Hm. Most of this is from the first two weeks of school. Zombies and monster thingies... Then we've got some Garretts drawn for Character Design (will be using him for my posing assignment), and... an arm, drawn by nobody!

Oh, and Blimey, who is better than everyone. 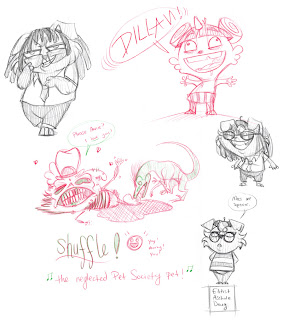 And now we journey even further into the realm of randomness... Apparently all the cool kids in our class are playing Pet Society these days, so the other day we were all drawing each others' Pet Society pets. And I guess they were supposed to be cute or something, but what's the fun in that? I drew my own pet, Doug, Chelsea's mentally special pet, Dillan, and Annie's pet, Shuffle, who hasn't been checked on in six months.

And a random boar for Annie... 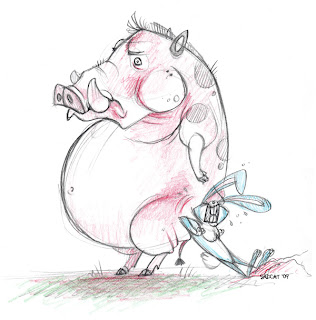 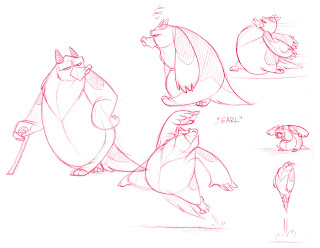 This is the character I used for my rotation assignment. Earl was just sort of randomly created in the caf one day, and he followed me to Character Design, infiltrating my project. For these pictures I was asked to mimic a pose the teacher had drawn, using Earl, and then show Earl running, walking, and jumping. 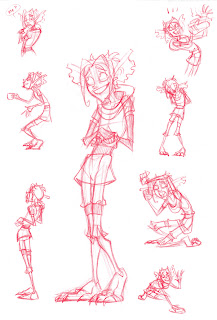 The next assignment is posing, for which I'm using Garrett! I spent last class playing with pose ideas... now it's just a matter of making them all larger and inking them. I do this sort of stuff for fun anyway, so this assignment is one I will enjoy muchly. Character Design is definitely my favourite class. I can't quite get over how unreal it is to be told by a teacher to do something I love to do, and something that would have gotten me in trouble if caught doing it in any other school. 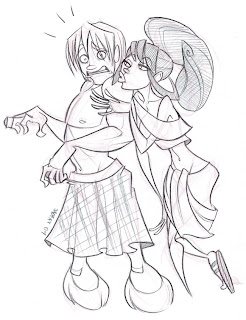 Promised to post this one for Annie. Her characters, Ainmire and Kara! This is usually hanging on her bedroom wall but I had to steal it back in order to scan. :B 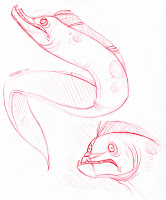 And lastly, some concept art for Animation. We have to animate a marine animal, and I'm either going to do an eel or a stingray. More likely the stingray, but I didn't have a ref. handy in class today, so I drew the eel instead.

And speaking of animation, I'll try and post a video of something I've done. Most likely my balloon or pendulum, buuuuut I think that's enough for this particular post...

Cheers!
Posted by Sarah Anne Davis at 7:11 AM 3 comments: