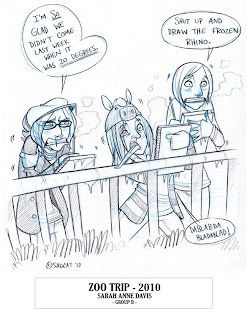 Today's post is brought to you by the letter G, the number 57-and-a-half, and multiple drawings of animals done for school projects (unusual sponsor, I realize, though I don't ask questions).

We begin with boring realistic animals, done for Life Drawing class. The entire first year went to the Toronto Zoo to draw depressed-looking animals freezing their asses off at the end of March (seriously, who thought cheetah + Southern Ontario winter = believable home away from home?). It was quite an enjoyable day despite the weather, and also despite the fact we only saw about an eighth of the whole park.

(Many excellent views of the frozen asses in question.)

These are a couple of my gesture pages. Mostly monkeys because the monkeys were inside and the inside was warm.

And some longer studies. The tigers were the only outdoor animals not looking completely miserable. In fact several of us were offered the rare opportunity to bond with our layout teacher through the magic of watching one of these tigers poop into an empty sloping pool. "It's like a game!" 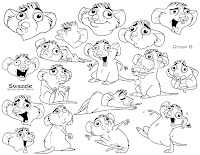 And lastly I have a Swazzle reference sheet. This was done for our last Character Design assignment, so I decided it was about time I used a rat. And which rat better than my funny-looking goofy adorable Swazzle girl? The drawings are cute and all, but they don't do her justice... 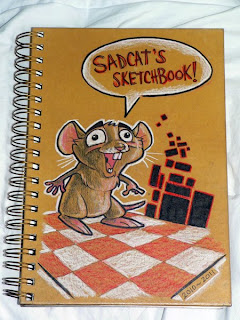 Finished my first year of animation and immediately went to work full-time at Sheridan, so there wasn't much of a break from massive distractions. STILL, I have plenty to show you. In fact, I may have too much, so I'm going to break this down into a few posts over the next several days.

I'll start with sketchbook stuff. I got a new sketchbook, and made a personal vow to myself that this sketchbook would be my new baby and feature nicer work than my usual scribbly conceptual stuff (up until now I've only really used a sketchbook to messily figure out compositions, which I then draw on different paper).

So far so good! My new sketchbook is now my most favourite-est thing in the world. Only downside is the coil prevents me from scanning anything, so I'm just taking photos... 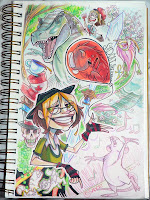 Behold, my completely unnecessary title page! This thing took me close to two weeks to complete, as I was just adding to it on my breaks at work. It represents me and my love for crazy things, particularly demon fetus balloons and the taming of dinosaurs for personal transport.

And also, thar be dragons. I've been drawing a lot of dragons lately for a special reason that I will tell you about eventually. Aside from that reason, well, I just like dragons and missed drawing them.

Plenty more sketchbook stuff to photograph, but I'll leave it at that for now. Today is a day of mourning, as I finally made it to David Tennant's last episode in Doctor Who and am feeling lost and confused. Come to think of it, you should expect some Who fan art soon as well. It is my only way of coping.
Posted by Sarah Anne Davis at 1:54 PM No comments: