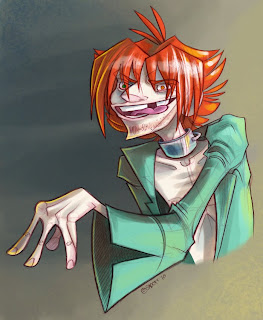 Well what's new? Mostly the same ol', same ol'. Lots of stuff happening all of the time, so I generally forget to mention each and every little thing. I guess the coolest new announcement is the Artist Trading Card Club that Annie and I started at Sheridan. We've been big into ATCs for a long time now, and have always kind of wondered how much interest an ATC club would get at the school. After several of my animation classmates urged me to go ahead with the idea, we discovered that, wow, in fact LOTS of people are interested! We've got about 30 members now and we had our first meeting last week, which consisted of art jamming, video watching, and junkfood-eating. It was really a lot of fun. We managed to fill four swap groups (5 people in each group) for February, and I'm pretty sure Sheridan's bookstore is going to be consistently selling out of their blank ATC card packs henceforth.

REALLY looking forward to seeing everybody's finished cards at our next meeting!

The painted doodle above is of creepy pervert, Fray. Just one of a lot of random drawings I've done for myself lately but can't find time to colour. I'm also hugely in the comic mood right now and desperate to work on some Awakened, but will have to wait for school to finish. It's like an itch I can't scratch. Especially with our story and film classes, which are really opening my mind to new ways of telling this story and better methods of getting around old obstacles. Maybe I'll get some time to at least sketch/ink some pages on break week.

COMICS. I'm reading a lot of them right now too. Currently I'm in the midst of:

There are a bunch more I want to buy, but it has come to my attention that comics cost... MONEY!? The horror. I want to start Y: The Last Man and get the next Hellboy, and continue with Sandman and Fables and I want The Dark Knight Returns and Batman: Year One and, and--stupid cheap student lifestyle. It does not play well with my need for good stories and pretty pictures. Oh well. My conversation with the dude at the comic book store might be worth a cheap giggle:

Yeah it might have been clever if I wasn't completely serious. Oh well. Have another video of the Pink Panther! This is the same panther animation from before, cleaned up and placed on a proper background, done for Digital Tools:

Just a quick little update with a few things I've been working on, as I've been informed that I don't update my blog neeeeear enough. I guess I have no excuse, except for an impatience for scanning. It's 2010! My scanner should collect my art, scan it for me while I drink lemonade under the sun, and then write my blog posts for me. Psh... the future is a total letdown.

Anyway, I have utterly failed thus far in actually sharing any real animations from my animation course, so here's the latest. PINK PANTHER WALK. If I never see another Pink Panther cartoon it will be too soon. Unless it's the 90s version with Matt Frewer.

Our next animation assignment is the head rotation, and I've chosen Louis the Alligator from Disney's The Princess and the Frog (which is a freaking amazing movie, by the way, and you should spend lots of money on seeing it many times so that Disney takes the hint and keeps producing classically-animated films).

So I've been drawing many Louiseses... seses to get a feel for the character before I even attempt to rotate him. He's actually hilariously fun to draw, but since he's just a big blob for the most part, he's also kind of tricky. I'm not quite there yet, but I'm getting close. 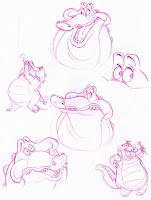 I adore this gator. 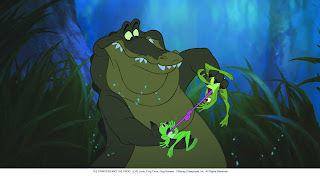